This past weekend I spent time with friends at the Lollapalooza music festival in Chicago, Illinois.  For those of you who are not too familiar with the festival, it is three days full of music and bands on multiple stages in Grant Park.  Some bands are national acts and others aren’t so much, but it doesn’t matter.  Festivals like this open up people’s minds to other music they might not have heard of before, though you have to work around the schedule and hope that two bands that you want to see are not playing at the same time.  It’s a difficult choice for some people, and for others, there is no question. On the second night, it was clear who one particular girl was there to see.

Saturday night, my friends and I were sitting on a grassy hill where we could view both the Lake Shore and Red Bull Select Sound stages where The Lumineers and Mumford and Sons would play.  A lot of people were sitting on blankets, ponchos, or just on the grass to claim their spot.  It was going to be a huge night and the stages were going to be packed with people.  There was not much room left on the hill as the time got closer for The Lumineers to take the Lake Shore stage, but a young female found a small spot right next to me and my friends. She was by herself and looked to be a very nice and conservative girl; much different than most of the other girls at the festival.  It was normal for people to check out bands by themselves since everyone within a group may have wanted to see other bands that the others did not want to see.  I left my group earlier in the day to see Matt & Kim, who were fantastic.

Not much attention was given to this girl while she sat there.  She was quiet, wore her hair up, and was wearing a long skirt with simple canvas shoes.  She was not there to get attention.  She was there just to see and listen to music.  This was never more evident than when The Lumineers hit the stage. She lit up and smiled immediately.  She closed her eyes, she sang, she moved her head side to side slowly to the music as she sat on the hill with her shawl over her shoulders.  You could tell she was content.  She seemed to know most of the songs and didn’t mind when people were standing in front of her.  Her kind and conservative nature wouldn’t let that ruin her experience.  She patiently waited for them to sit down and continued to enjoy the music.  When Mumford and Sons come out on the other stage right after The Lumineers, she was on her feet with a smile from ear to ear.  She was there to see them.  She wasn’t at Lollapalooza with anyone else because everyone in the park was watching Mumford and Sons as well and she stood alone.  She stood in place and kept her arms straight to her sides clutching her skirt and danced in place, but you could hardly tell.  She was like a fuse of a firecracker waiting to go off and once some people around us left and she had a little more room, she finally let go, letting herself dance freely and enjoying the music 150 yards away.   Her joy was amazing to watch. 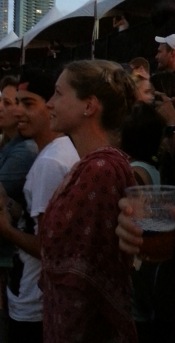 I couldn’t help but to watch her because I knew how she felt.  I know what it’s like to be in love with music and how nothing in the moment can make you happier.  You could see this in her face and could feel her emotions.  To be someone that has experienced this many times before, it was nice just to sit back and see what it looks like from an observer’s point of view.  I wanted to talk to her and I wanted to get her name, but I was afraid that if I spoke to her, I’d ruin her moment.  I didn’t want her to be aware that people, my friends included, had noticed her because she was obviously very quiet and wouldn’t be surprised if she was a bit shy.  But I desperately wanted to know her story.  Even though I’ll never know it, being there and watching her moment was enough for me.  I’m not a huge fan of The Lumineers or Mumford and Sons, but because of her, they were one of the highlights for me during Lollapalooza.

What are you looking for?